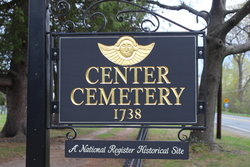 The Town of Southampton has three cemeteries; the Center Cemetery, the Gridley Private Cemetery and the West Part Cemetery.

Southampton Center Cemetery is believed to be the oldest continuously operation cemetery  in the Commonwealth and one of the oldest in the country.  It is listed on the National Register of Historic Places.  The cemetery is located on Route 10 about a quarter-mile north of Southampton Center Historic District.  Center Cemetery contains more than 3,000 graves, dating from the earliest in 1738 to the present.  It is a public cemetery, administered by a three-member Cemetery Commission.  Having always been the principle burying place in Southampton, the cemetery represents the town’s entire and ongoing social history.  A significant number of original setters and Revolutionary and Civil War veterans are buried here.  Over time and as needed, additional land has been acquired to enlarge the cemetery to its current 12 sections.  In 2003, the town purchased and adjacent 80-acre parcel, a portion of which will be used to further enlarge the grounds.  The new parcel is jointly administered by the Conservation Commission, the Cemetery Commission, and the Water Department.

Information includes Center Cemetery Sections map. Index 1 and Index 2 list names of those buried here, and indicate the page number where their inscriptions are listed in “Tombstone Inscriptions of the Cemeteries of Southampton, Massachusetts 1738-1940,” a compilation of a work by Mrs. Max Lederer, Jr. and a work by Richard Frary.    More information is available on our in-library flash drives. 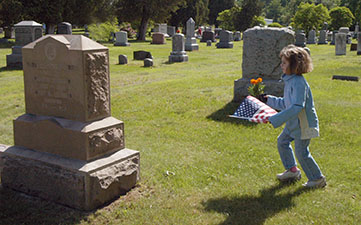 “The Gridley Private Cemetery is located on the west side of the College Highway, a short distance from the center of town.  It contains nine tombstones, seven of which are Gridley family members.  The first burial were was in 1835 , the last in 1855.”

“This small family burying ground…on the west side of the highway just south of the four corners a short distance south of Southampton Village. It is the only private cemetery in town. It is in a good state of preservation, although there are no burials there today.” –From Gridley Private Cemetery Records. See flash drive.

“The Fomer, or West Part Cemetery, i s located in the West Part of the town.  It is located on land that was part of the farm of Noah Dady.  Many of the stones are signed by the cutter, T. Sturges.  The oldest tombstone is that of the infant son of Isaac and Mindwell Parsons, who died in 1788.  The most recent tombstone is dated 1904.  There may be other earlier burials here, without stones.  The care of the Cemetery was taken over the town in 1810.”

Source:  Southampton Master Plan,  June 2013
“This cemetery is located in the west part of Southampton, or “Fomer”, as the section is called. It is on the west side of the road leading north from “Russellville” to the White reservoir and Westhampton… There are several graves of Revolutionary soldiers here, most of which have been marked…The last burial was in 1904.” – From original edition. Flash drive contains description, map, list of persons interred with inscriptions.