Samuel F. Edwards was a tailor and resident of Southampton and enlisted in the Union Army 52nd Regiment Massachusetts, Company D on October 11, 1862.  He attained to First Lt. and mustered out on August 14, 1863.  Below are a sampling of some of the events he wrote about to his family members back home.   His letters are available to patrons to be read in the library.  Please ask the librarian for assistance. 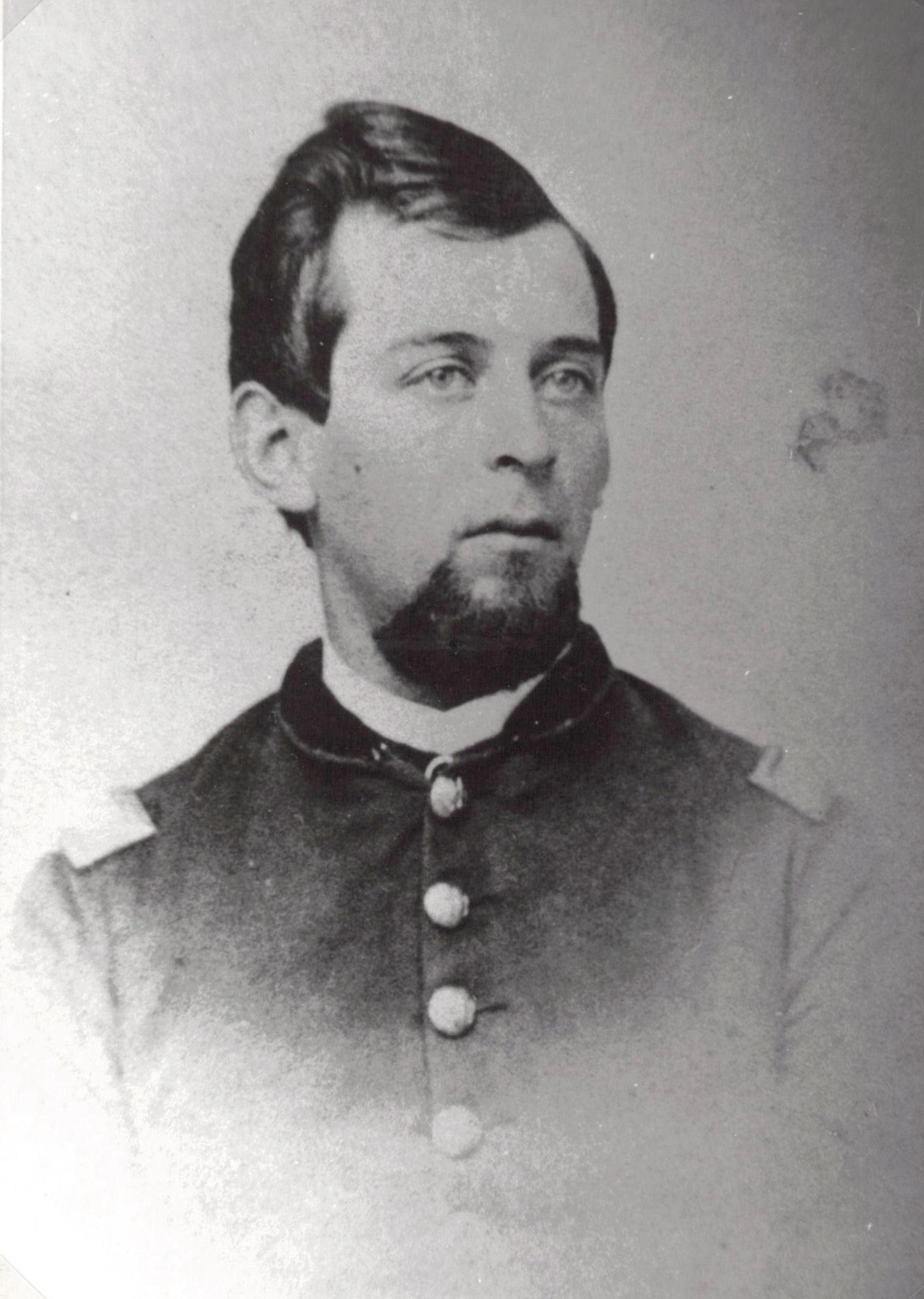 Address excerpt From Address by Lt. Samuel F. Edwards at the Reunion of the 52nd Regiment in Greenfield, 1920.

“… The blowing-up of the gunboat Mississippi during the Red River campaign in the year 1863, as told by an eye witness:

If you will take a map of Louisiana, you will find, about 250 miles above New Orleans, a bend in the Mississippi River, the west bank of which is called Point Coupee, and the east side, Port Hudson.

This is a sharp bend, about five miles in extent. and the channel runs very near and even cuts into the shore, so that it has left  the banks of that side ninety feet or so above the water–thus making a natural strategic point for the control of the Mississippi.

Two hundred and fifty or three hundred miles above is Vicksburg, where the bend of the river is about 15 miles long. the current turns towards the east shore, thus making another strategic point for the control of the river.

Both of these places were very strongly fortified by the Rebels, for the loss of them would cut off their food supply from all points west, and their army was largely dependent on the beef coming from Texas.

The river from Ohio to Vicksburg had already been opened by Commander Farragut’s gunboats, and from New Orleans to the sea.  Forts Jackson and Phillip had been taken and the Mississippi opened to New Orleans; and General Grant was instructed to open the river from Vicksburg down.  Therefore, an army of 20,000 men under the command of Major General Banks was recruited in the summer and fall of 1862 to co-operate with Gen. Grant.

This expedition started in December and reached its destination, Baton Rouge, about the first of January, 1863.  There they were instructed in regiment, company and brigade drills until about the middle of March, when Grant’s advance on Vicksburg made it a military necessity to create a diversion in his favor by a reconnaissance on Port Hudson, defended by a garrison of about 20,000 men,  for the purpose of keeping them from reinforcing Pemberton,  the rebel commander at Vicksburg. And at the same time Commander Farragut and his fleet of gunboats under cover of the land attack on the Rebel fortifications, would try to pass his fleet or part of it, past the fortifications, and thus gain control of the Red River, which emptied into the Mississippi about forty miles from Port Hudson, which would effectually shut off both garrisons from their principal source of food supply.

The reconnaissance was attended by a good many laughable, and some not so much so, incidents, as it was the first campaign for nearly all the soldiers in the corps.   Many of them started out with knapsacks that weighed from 0 to 60 pounds, but most of them threw them away entirely, or lightened them up considerably in the first ten miles.

Being in the advance brigade, I had a chance to see the river fortifications, or a shadow of them, about ten o’clock that night.  We threw out our skirmish line about 1,000 feet from the river works; our field batteries came up, unlimbered and opened fire about this time, and Admiral Farragut’s fleet, coming up, opened fired on the water batteries.  In return, they got the full force of Rebel batteries as fast as they came into range.

On the west shore, opposite, which was low and almost on a level with the water, the Rebels, in anticipation of the attack, had piled a large heap of dry bush–forty or fifty feet high, to which they set fire as soon as the fleet came into sight, thus lighting up the whole width of the river.

I had been in the saddle from six o’clock in the morning until nearly midnight and was very tired.  Seeing a little chance for a rest I slid off my horse, threw the reins around my wrist, and lay down on the ground with a pigstraw for my pillow, and not withstanding that the cannonading was so terrific that horses and cattle thirty miles away trembled with fright, went to sleep.

I dreamed I was up in Southampton.  It was a bright, starlight night.  The rest of the family were out in the yard in front of the house.  I made the remark: “Why, the stars are just the same here as they are in Louisiana!.”  Just then a meteor seemed to shoot across the sky and exploded with a loud noise!  I awoke to find myself on horseback, and looking towards the river I saw a large column of fire and smoke between that and the fortifications, so that as one after another of Farragut’s fleet came into range they were much exposed as they would have been in daylight.  None of the boats were sunk, but a number were badly damaged, and had to float back down the river, two only of the fleet succeeded in passing the batteries, but they were sufficient to control the river between Port Hudson and Vicksburg.

The old Mississippi, famed in story and song, was badly disabled and ran aground near the batteries.  When the crew saw that she was about to sink, all who had not been killed or disabled took to the boats for the shore, where many were later taken prisoners.  Lieut. Dewey afterwards Admiral Dewey, and the captain were the last to leave, after first applying a match to the magazine.

At this time I was about a third of a mile from the shore, and I saw a blaze of glory with her flags flying, floating off downstream to her glorious fate.”

I just got time to write a little.  Tis now 12 1/2 o’clock P.M.   I came off guard at 10 but having a couple of prisioners  (sic) to attend to have only just been relieved.  One man I arrested for smoking between decks and another for leaving his post while on duty.  The last was an offence punishable with death but he got off with going to the guard house.  His name was Henry W. Gladden.  You probably know him.  I was obliged to arrest him but managed to get him off.”

…15 miles from the bar there is, once and awhile, a hut and now and then a small plantation.  I never saw such a God forsaken country as this is until you get up some 50 miles.  At 10 o’clock a.m. we passed Fort Jackson and St. Phillippe.  As we neared Fort Jackson the band stationed there played “Star Spangled Banner” and “Yankee Doodle.”  While they were playing we stopped alongside and as soon as they stopped playing we gave 3 cheers for the 31st. .. After passing the Fort we begin to come to the sugar plantation and it was real amusing to see the darkies run down to the banks and cheer us.  The plantations are from a half a mile to 3 or 4 miles apart.  The products seem to be principly (sic) sugar cane and oranges. .. Doesn’t look much like New England I can tell you.  A plantation consists of a medium sized Dutch shaped house with a few trees around it, on one side of which are the negro quarters which are usually quite neat looking one story houses painted white and an occasionally grand [one] with a veranda.  Back of the negro quarters is the sugar house.  They use mostly mules and carts to gather the cane.  We passed one plantation very near to the shore, perhaps we were not more than 4 rods from it.  The field hands were just over the fence cutting the cane, the overseer was on his horse a short distance from them.  As we came alongside of them they all quit work and came down on to the bank …   They seemed to be so tickled that they didn’t know what to do.  One old darky woman got down on her knees and hollered “Hallejuhah” until she was hoarse, then she tried to turn a somersault and almost rolled down to the river. ”