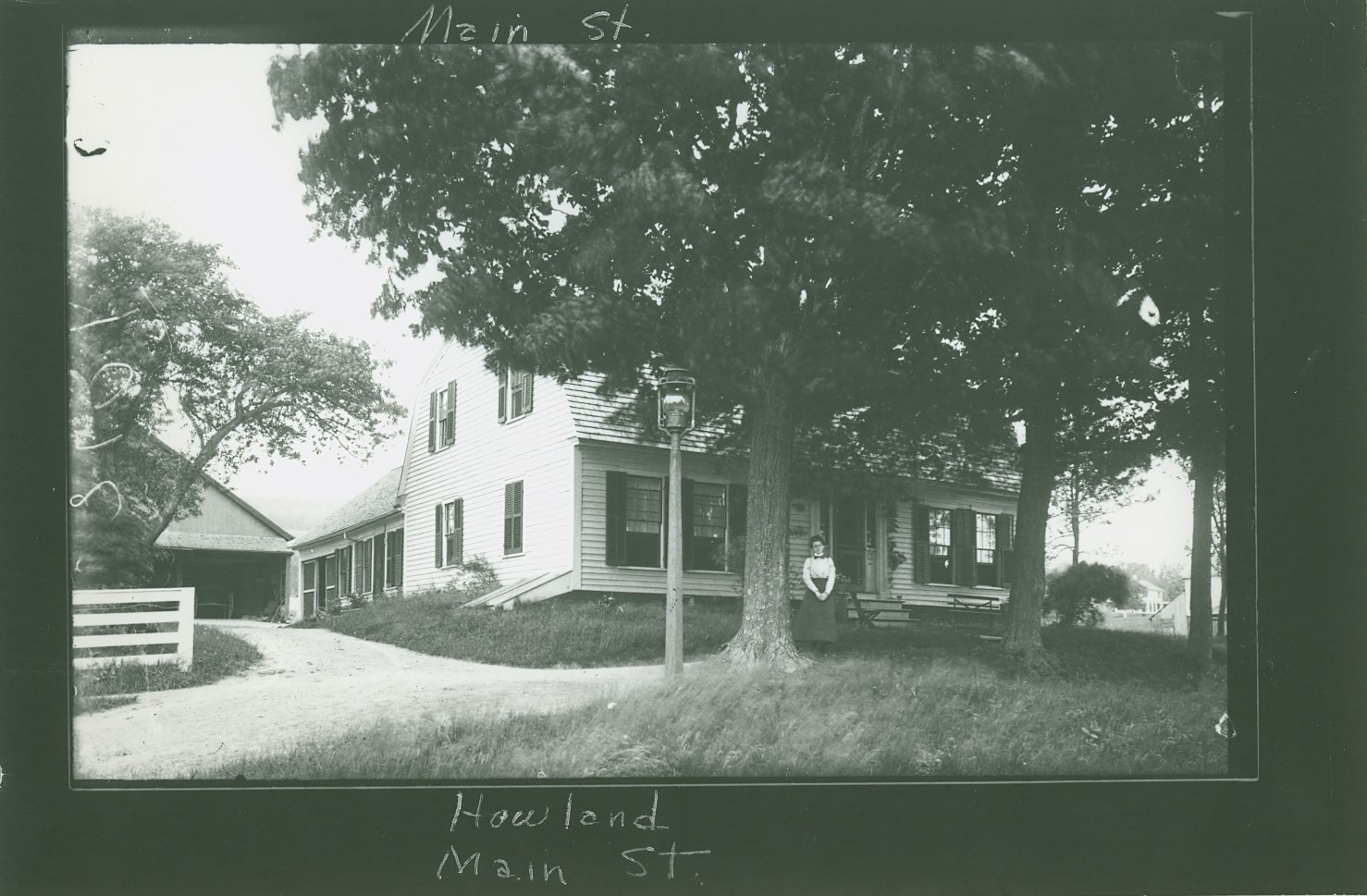 The historic Chapman house on Main Street, now occupied by the Willard F. Howland family was built on land originally owned by Timothy Clark in the 1730’s.

Squire Asahel Chapman bought an acre of this property from Timothy Clark in 1797, and in 1805 purchased an additional 12 acres from Zenas Clark, Timothy’s son.  Mr. Chapman, son of David and Abigail (Willett) Clark, born in Norwich, Conn., March 14, 1770 and married to Sarah Winter of Chesterfield in 1794.

He was a blacksmith, and his shop was located south of his homestead.  He also manufactured scythes and plows with the help of an apprentice.  A substantial citizen, he was a selectman,  justice of the peace, and a  member of the State legislature for many years.  His 11 children were all born in Southampton, their names being Julius, Annis, Asahel Jr., Sarah, Laura, Abigail, Charles, Rachel, Daniel, William and Silas.  Chapman was assisted in building the house, a gambrel-roofed Colonial, by his friends who wished him to remain in town.

Zaavan Moore owned the house only a year having bought in on April 20, 1846 with 11 acres of land from Asahel Chapman and sold it to Orrin Moore, son of Zaavan on June 12, 1847.  Moore was representative to the State legislature.

In 1859 on March 28, Orrin R. Moore and Ann Moore whose only son was drowned in Florida, sold the house and eleven acres of land to Samuel J. Loomis for $1700.  In a footnote to history it may be repeated that Loomis was grandson of that Nathaniel Loomis had a narrow escape from the Indians.  It was in 1757 after the tragedy at Fort William Henry when the prisoners were butchered that young Loomis and Joel Clapp escaped from the Indian captors, after having been stripped and plundered, and by outrunning their pursuers through 14 miles of forests, reached safety.

The next year on April 8 Henry C. Strong sold the property of 11 acres to Ansel Searle for $1800.  Delia A. Strong, wife Mr. Strong signed the deed.

Records show that in the next land transfer the property had grown to 15 acres, “more or less”, and this was  purchased by George H. Lyon April 28, 1886 for $2825, from Mary M. Searle (Ansel’s widow), Henry A. Searle and Ophelia A. Clapp, who derived their title by will from Ansel Searle.

George Lyon, grist mill owner, was a selectman and active in town affairs for many years.  His mill on the west branch of the Manhan was the center of grain business for local farmers.   Mr. Lyon had two daughters, Edith and Florence.

Wilfred A. Parsons was the next owner, and he bought the fifteen acres from George Lyon on March 25, 1901.  Wilfred Parsons was an experimental farmer having graduated in 1888 from the Mass. Agricultural College (now the University of Massachusetts).  He acquired more land to increase his acreage and operated a fruit and dairy farm all his life.  he was one of the first farmers to plant peach trees in the area, and customers came from miles around to buy peaches and apples from the “Parsons Place”.  he was one of the founders of the Holyoke Milk Producers Association.  He was clerk of the First Congregational Church for fifteen years, town auditor, president of the Village Improvement Society. and a trustee of Edwards Library.

Wilfred A. Parsons and Martina A. May were married in 1898 and they had three children, Dorothy M., Atherton W., and Anna T.  Dorothy married Willard F. Howland in 1925 and they live on the home place.  They have four sons:  John, Richard, Justin and Allan.  Atherton married Edith Pearson in 1937 and they have one daughter, Rosalie.  He operates a farm on Pomeroy Meadow Road, and is much interested in local history.  Anna married Carey Howlett and they live in Bridport, Vt., Where they operate a dairy farm.  They have five children: Linda, Stephen, Betsy, Peggy and Thomas.

On the death of Wilfred A. Parsons in 1938, Willard F. Howland took over the farm and operated the business until he sold out the stock and equipment in 1945.  The then went into the farm equipment business.  He served several terms on the Board of Assessors and has been town moderator for thirty years.

–Written by Dorothy P. Howland
–From “History of Old Houses” by Atherton Parsons