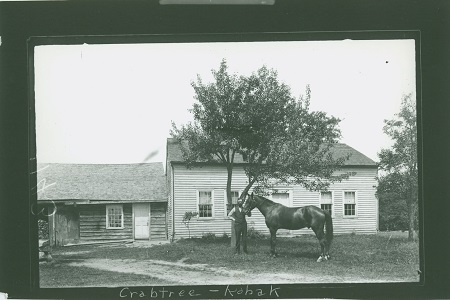 The land on which this house stands was sold by Job Searle the second to Silas Sheldon in 1799 (11 acres for 67 dollars).  This transaction also included about three-quarters of an acre on the east side of the road.

In 1817 Silas Sheldon sold the land on the west side on the road (describing it as 13 acres) to Benomi Coleman for $200.  The deed is as follows: beginning at fence at stake and stones on the highway about 20 rods north of the school house near my dwelling house, thence north on the highway to King Bascom’s land, thence west on said Bascom’s land to Zophar Searle’s land, south to the north line of my original far, thence east on said line to first bounds.

Benomi Coleman was born in 1780, the son of Captain Lemuel Coleman and Catherine Edwards Coleman.  Benomi married Zilpha Sheldon in 1806 and presumably built the first set of buildings here in 1817 or 1818.  Zilpha Sheldon, born in 1781, was the daughter of Israel Sheldon Jr. and Keziah (Bates) Sheldon.  Benomi died April 1856.

The original acreage of the farm was increased by subsequent purchases by Benomi Coleman and later owners.

Benomi sold the property to Silas B. Sheldon in 1854 and Silas sold it in 1856 to William Foley.

William Foley Sr. was a hard worker, a good businessman and generous with his dealings with the town. in 1899 he gave $1000 to Southampton on condition that $900 of it be spent for an iron fence on the south and north sides of the cemetery to correspond with that already erected along the highway.  He specified that the balance, $100, be invested and the proceeds annually be used in the maintenance of his cemetery lot as needed and any balance be used in the general maintenance and care of the cemetery.  He accumulated a large sum of money, which he left in trust for the care of his sons.

William Jr. pumped the pipe organ in the Congregational Church for many years.  Austin Weeks, a brother of William Foley’s first wife, also left a sum of money for the care of his nephews, William Jr. and George Foley.

After the second wife of William Foley died his nephew Charles Foley and Wife Mildred (Magrannis) Foley came to live with him and Charles took over  the ownership of the farm in 1900.  Charles and Mildred Foley had two children, Eva and Lester.  Mildred Foley died June 8, 1900 and Charles sold the farm to George Benson Later in 1900.  The Charles Foley family is more identified with the place now owned by Douglas Madsen on High Street.