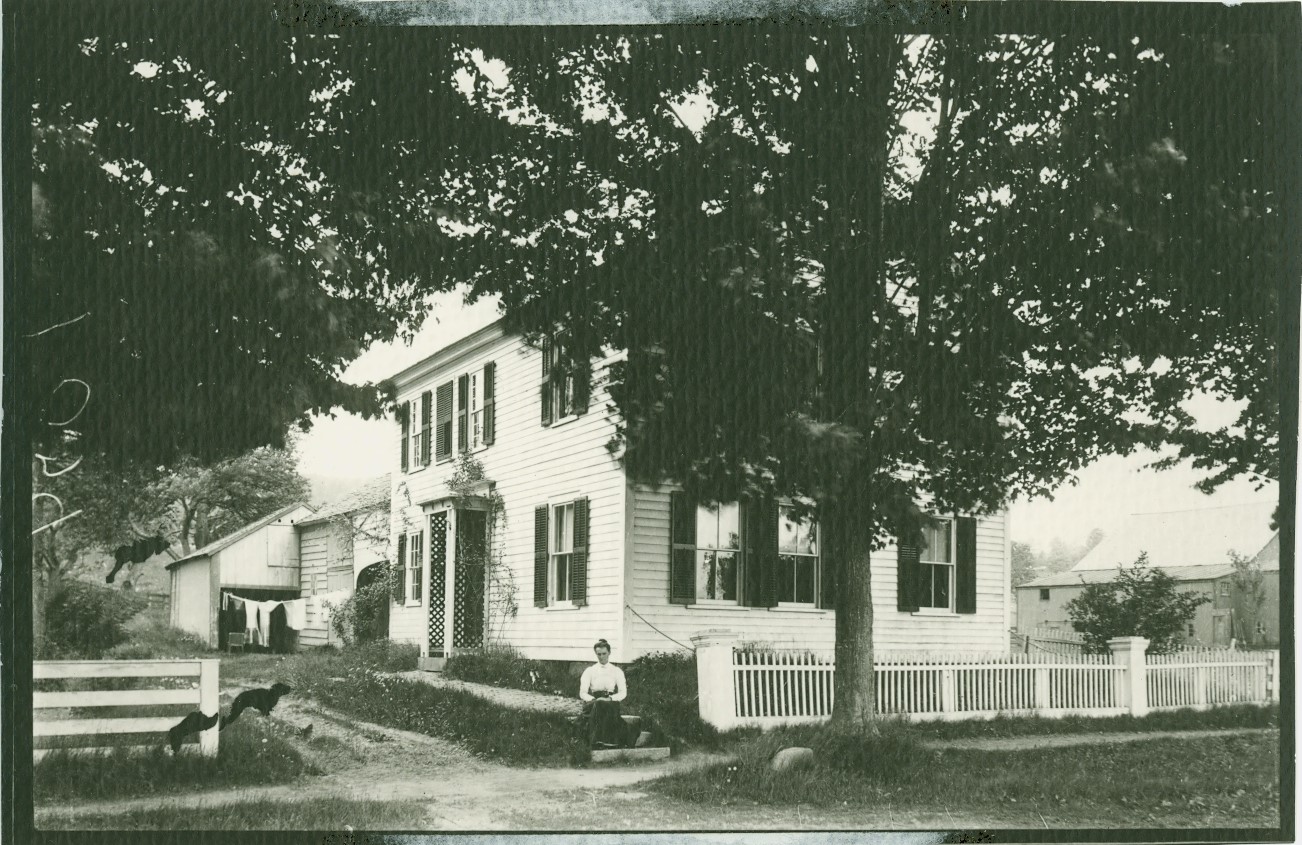 Sardis Chapman, born in 1803, married Dolly Searle (daughter of Cornelius and Dolly (Clark) Searle Nov. 23, 1827.  Sardis bought from Timothy Clark III on Jan. 16, 1827 the land where this house now stands.  The deed called for a quarter of an acre and the purchase price was $90, (108-465).  In later years Mr. Chapman made purchases of small pieces of land adjoining, making in all about one-half acre.

Presumably Mr. Chapman built the buildings in the summer of 1827, his house and barn, and a shoe repair shop just south of the house.  About 1890, this shop was hauled to Gardner Fowles’ and used as an ell.  It is still there and is now owned by Bernard Fowles.  Some of Sardis Chapman’s shoe repair tools are on display now at the room of the Southampton Historical Society.  They were donated by Mrs. Dolly (Searle) Allen.

According to tradition Mr. Chapman’s home was a station of the underground railroad for escaped slaves.  In his later years he became much interested in the genealogy of his own and other families living in town, leaving valuable writings on this subject.

Sardis Chapman and his wife Dolly had four children but only one lived beyond sixteen years of age.  This one was Harriet Eliza Chapman, born in 1830.  Dolly (Searle) Chapman died in 1844 and Sardis married (2) Sarah Morgan in 1846.  Sarah died in 1865 and Sardis married (3) Hanna Mix in 1866.  Harriet Eliza Sardis  never married.   She took care of her father, Sardis, in his last years.  Sardis died in 1892.  Harriet died in 1896, and left $1000 to the town of Southampton for charitable purposes.

Fannie Spooner (probably the widow of Samuel Albert Spooner) bought this property from the estate of Harriet Chapman in 1896 for $1000, (492-131).  Mrs. Spooner had two daughters; Grace Spooner, single, and Dora A. Spooner who married Timothy Phelps of Northampton.  At the death of Favvie Spooner, the property was left to Grace and Dora.  Dora Phelps transferred her one-half interest to her sister Grace.  Then in 1900, Grace sold to Henry S. Sheldon (545-507).  Mr. Sheldon had been a prosperous farmer in the south part of town.

George Clark and his wife Mary (Johnson) Clark bought from the estate of Jesse F. Finch in 1915, (909-343).  The four children of George and Mary Clark are George Jr., Janet, Gordon and Joan.  They are all married and live in other states.  George Clark, St., died in 1961.  Mary Clark is a teacher in the William E. Norris School in Southampton

—From “History of Old Houses” by Atherton Parsons