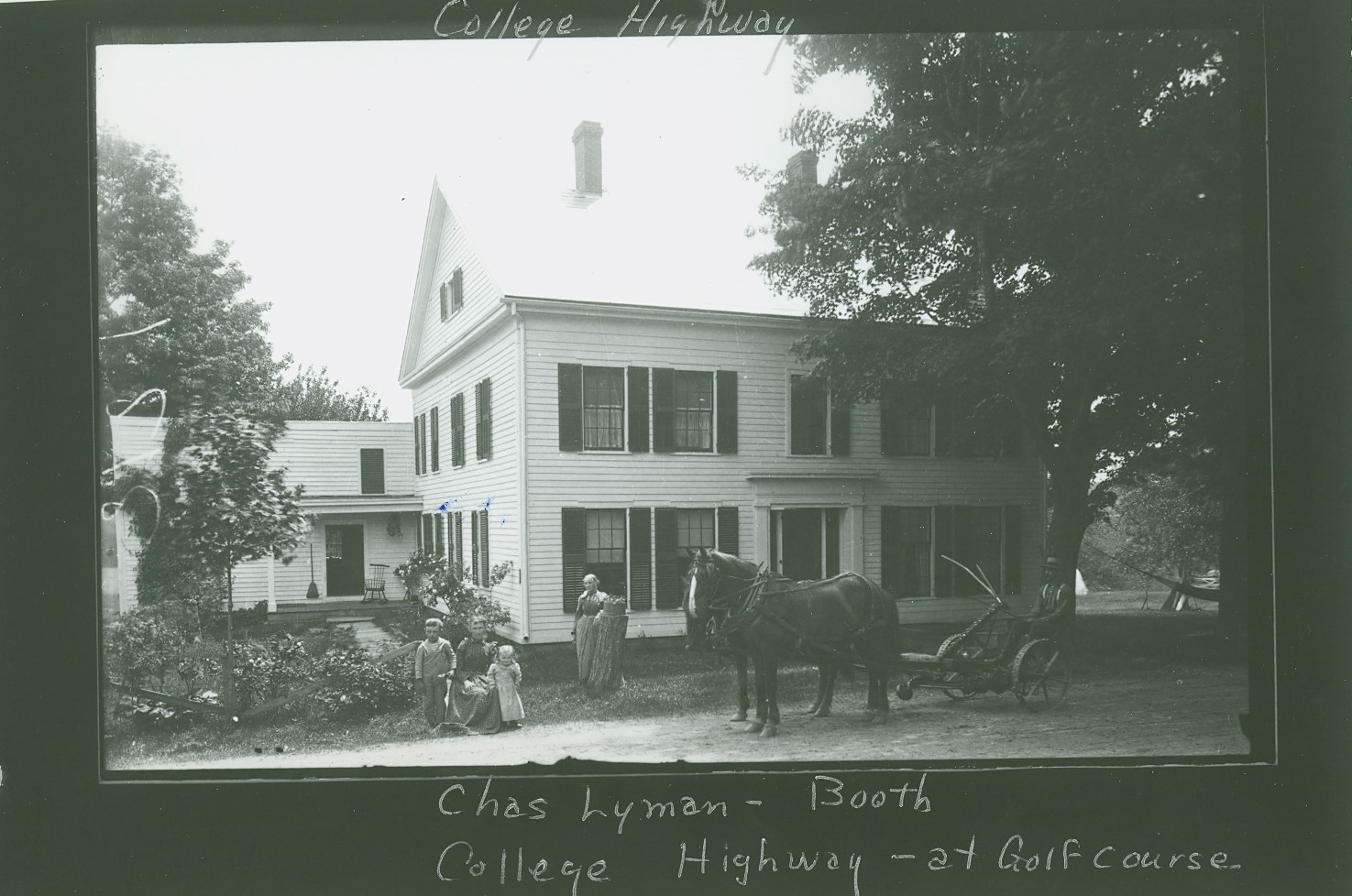 Deacon John Clark was one of four men who were given liberty, by the proprietors of the town in 1732, to set up a sawmill at the Falls on Great Brook or below upon Manhan River.  Whether a sawmill was set up at that time is not known, but certainly at a later date the Clark family did have an interest in a sawmill

Mrs. Submit (Searle) Clark died 1757 and Deacon John Clark m. (2) widow Submit Judd of South Hadley.  He died in 1766 and beyond certain bequests to his widow and his other survivors he gave the rest of his estate to sons John and Gad.  However, the son John died the next year in 1767.  Quoting in part from his will “to my sisters Martha and Abigal room in my house to carry on their work as long as they remain unmarried.”  He left them also a certain amount of money as he did for his other sister Submit (Clark) Clapp.  All the rest of his possissions (sic) he left to his brother Gad.

Gad Clark m. 1773 Hanna Edward (dau. of Samuel Edwards).  They had two daughters Tryphena and Submit.  Gad was a soldier in the Revolutionary War, was attacked by sickness and died soon after returning home in 1777.

His widow m. 1786 Stephen Lyman of Chester as his second wife.

After Gad Clark died in 1777 this farm was divided, with his daughter Submit receiving that part on which the buildings of Charles Goral now stand.

Gad Clark’s widow and daughter Tryphena received the rest of the farm and these two shares finally passed to Gauis Lyman husband of Tryphena.

Early in 1841, Gauis and Tryphena had sold this property for $3,000 to their son, Gauis Lyman, Jr.  He, however, was not living here at this time and probably had not lived here since he was married in 1828.

In 1842, he, Gauis Lyman, Jr. sold this property to his uncle, Samuel Lyman of Chester.

Samuel Lyman was a son of Stephen Lyman of Chester by his second wife, Hannah (Edwards) Clark Lyman, the widow of Gad Clark.

Samuel Lyman, born 1787, married Miriam S. Tinker in 1809.  They moved here from Chester in 1842.  Their ten children were all born in Chester, but six of the ten moved here with their parents.

Charles B. Lyman, youngest son of Samuel and Miriam, stayed here with his parents and in addition to general farming he operated a farm produce route in Springfield.  His wife, Lydia Angeline Avery, was a daughter of Richard and Mercy (Hutchinson) Avery.

In 1855, all but the kitchen of the old house was torn down and replaced by the main part of the present house.

Charles L. Lyman stayed at home and worked the farm with his father.  His wife, Etta Francena Ranger, born 1869, was a daughter of Joseph P. and Mary (Rogers) Ranger.  Charles and Etta Lyman had three children–Harold, Hazel and Ralph.

Harold born in 1893 married Bessie Strype.  He built a house on the home farm (now the Rapalus house). They left town after a few years and Harold married (2) Merle Irene Bennett of Brimfield.

In 1919 Hazel married Orrell Hendrick, they had three children–Ruth, Robert, and Theodore.  Ruth married Girard Catalana and they live in Hartford, Conneticut. (sic)  They have one son, Robert.  See page 68 in this book.

Theodore married Maxine Frost from Cooper, Maine, and with their children, Darrell and Paula, live in a house which he built on the home farm (on the west side of College Highway).

Hazel, in 1960, married (2) Albert Vincent and they occupy a new house also on the original farm property.

Ralph Lyman married Rose Tessier and have one daughter, Norma.  They lived for a few years in Southampton, but now live in East Longmeadow.

In 1930 part of the farm was leased for a golf course which has since been expanded and is now a major attraction.

In 1945 Charles L. and Etta Lyman sold the buildings and land east of the highway to John and Ida McTurk and moved to the W. J. Lyman (Ranger) house on East Street.

With this sale the major part of the farm passed out of the Lyman family after an ownership of about 150 years.

A feature of this property which should be mentioned is the spring of water situated a short distance south of the buildings, which reputedly has never gone dry.  It supplied enough water for six or seven tubs in house and barn.

For many years the house was used for two families–the married son on one side and the “Old Folks” on the other.

John McTurk was killed in an automobile accident and his widow, Ida McTurk, sold the golf course and the house separately; the house and a small amount of land to George L. and Mary L. (Crowley) Booth.  This was in 1955.

Both Mr. & Mrs. Booth were born and raised in Holyoke and he works at the Monsanto Chemical Plant.

They have ten children: Barbara, Nancy, Mary Lou, Richard, Carol, Linda, Howard, Kathleen, Robert, and Janet.  The children were all born before the family moved here, but since then eight have been married from this house.

Two of the girls settled here in Southampton; Nancy, whose husband is Roger Sheafer and they live at the corner of High Street and Foamer Road, and Kathleen whose husband is Edward Dzialo and they have an apartment upstairs at the home place.

Of interest–the Submit Searle who married John Clark, the first settler on this farm, was born September 17, 1704, four months after her father John Searle was killed by Indians in the massacre at Pascommuck.  Her mother Abigal was taken prisoner and knocked on the head, but she was rescued and lived for many more years.  Submit’s brother Elisha, a boy of nine in 1704, was taken to Canada by the Indians and lived with them for 15 years.  He finally returned, married and settled in Pascommuck.

Much of the information in this article was supplied by Mrs. Hazel Lyman Vincent and Theodore L. Hendrick, daugher (sic) and grandson of Charles L. Lyman

*No information about the tenth child.