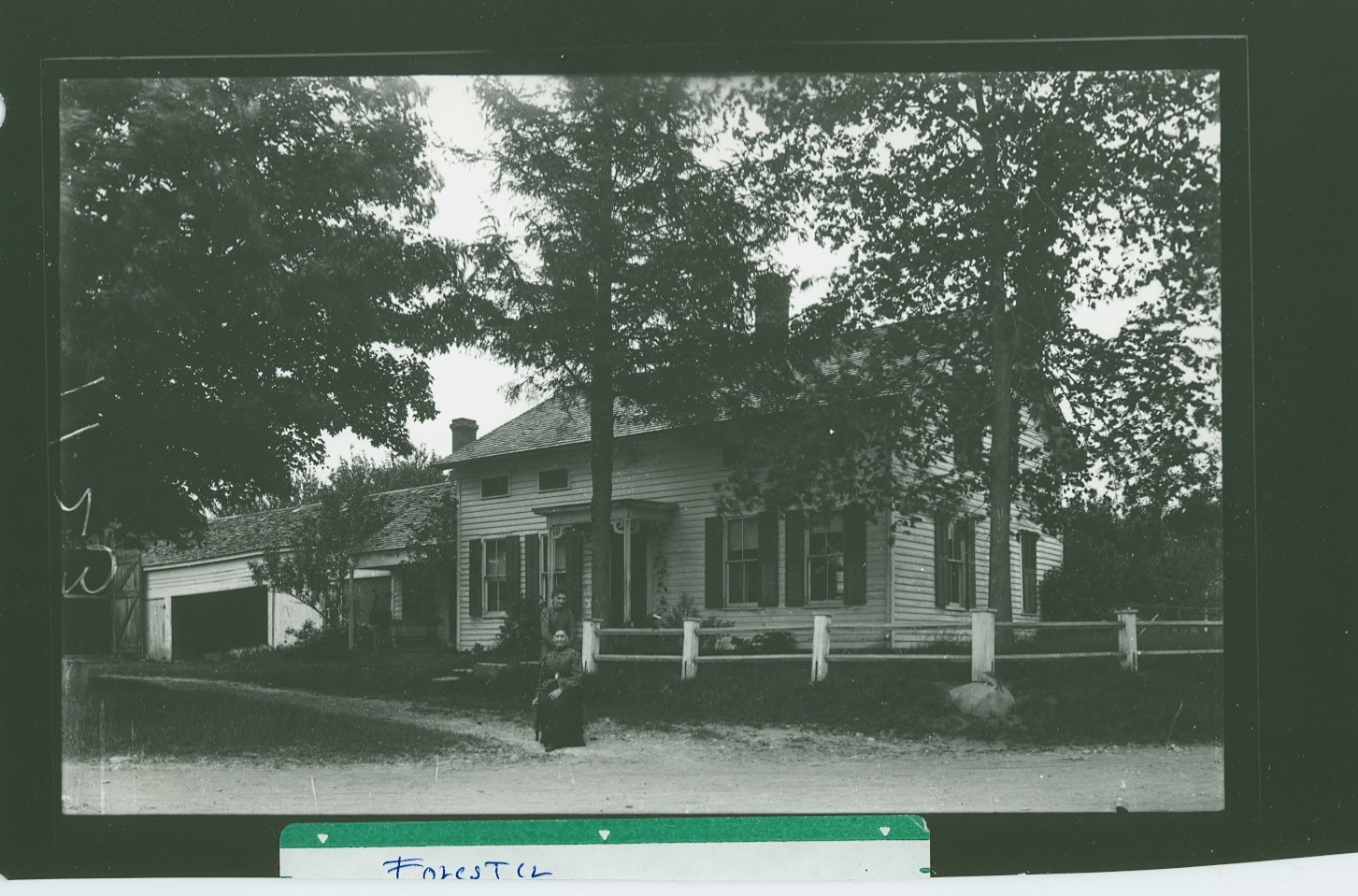 Bildad Searle had a house in this immediate vicinity in the 1760’s, just where has not been determined.  In 1830 Edmund Searle bought from his father Zophar Searle II and his brother Zophar Searle III, 1/4 acre on land at this location.  It was 4 1/2 rods on Foamer Road “being southeast corner of home lot of grantors” the price was $25, (75-472).

Asa Searle bought from Joseph Sheldon in 1856 for $1200 (169-202).  Asa was the son of Moses Searle III and Mary (Bosworth) Searle, his wife was Bethsina Searle, daughter of Cornelius Searle and Dolly (Clark) Searle.  The had no children.  Asa Searle was a farmer and house joiner, also he bought and sold real estate.  He sold this property to Asa Niles in 1865 (229-183) and then moved to Unionville, Conn., where he died in 1872.  His widow married William Delaney.

The Asa Niles Family owned the property until 1910, renting part of it some of the time.  The widow, Mrs. Niles lived here for some years prior to 1910.

The Jeremiah J. Woodbury family came to Southampton in March 1902, and for several months lived with Mr. Edward B. Lyman and wife, Maria, who was a sister of Mr. Woodbury.  They then rented part of Mrs. Niles’ house until Mrs. Niles died in 1909 or 1910.  Mr. Woodbury then purchased the property from William H. Niles, heir of Asa Niles, Jun 8, 1910 (656-489).  The Woodburys had one daughter, Clare, who married Alfred Hogan and now live in Nova Scotia.

In 1930 (864-42) Roy and Mildred Phillips bought from Mr. Woodbury.  The Phillips had moved to Southampton from Montgomery in 1928 and lived until 1930 on the Edward Searle farm.  On buying this property, they enlarged the barn and kept twenty or more milking cows.  The Phillips’ three sons are Dexter, Howard and Raymond.  Dexter lives in Florida, Howard in Hawaii, and Raymond in Southampton, where he built a house on an elevation on this same property.  He is married to the former Gladys Rooker, and they have two sons, Edward and Bruce.  In 1961, Roy and Mildred Phillips built a house further west on Foamer Road and moved there when they sold the old house.

Robert Leville bought from the Phillips the house and part of the land in 1961 (1358-328) buying for investment.  He tore down the barn, and built a garage where the shed had been.  In 1963 he sold the house, garage, and a small amount of land to Clifford J. Forster and his wife, Dorothy Mae Forster (1428-367).  The Forsters have two boys and two girls.  Mr. Forster is a commercial sales engineer with the Western Mass. Electric Company.