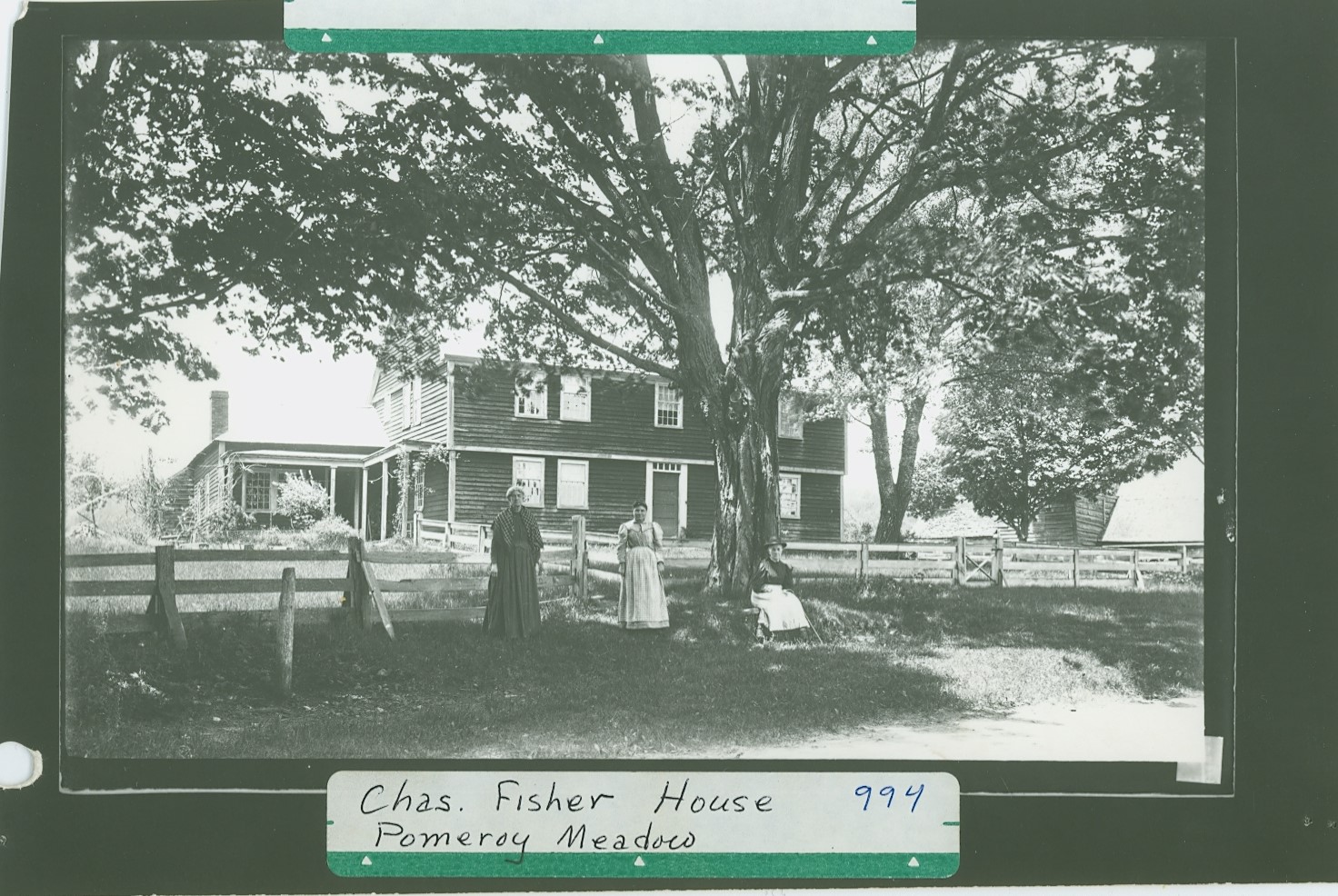 Eleazer Hannum was the first settler on this place, probably building the house in 1734,  He had married in 1728, Martha Root, so probably his first two children were born in Northampton.  However, according to the records, he had 14 children, 12 of them must have been born in this house.  His first wife died after having 5 of his children, and for his second wife he married about 1743, Dorothea Banks.

One of his sons, Eleazer Hannum Jr. married about 1756, Ruth Hall.  Their first child Ruth married Abner Sheldon of Southampton in 1776. They are the ancestors of Charles Fisher, present owner of this homestead.

Eleazer Hannum Sr. died about 1789, and he left the south part of his farm, 33 acres with buildings, to his sons, Joel and Timothy.

He left other parts of his land to other children, but the main part of the farm he left to his son Asahel.

Asahel sold out to David Thorp in 1793 (6-411a0, who came from Connecticut (probably New Haven).  David Thorp had eight sons.

Probably all of his children were born in Connecticut, but some of them came to Southampton with him.

He died in 1810 or 1811 and his will was probated in the latter year.  He evidently was fairly well off as he left to seven of his sons amounts from one dollar to $400.

To his son, Thomas, he left “all my land and buildings except a small piece of land opposite to my dwelling with the cooper’s shop on the same.”

Some of the brothers of Thomas settled in this vicinity.  One of them, Caleb, was probably the first settler on the Wolcott farm at the foot of Pomeroy Mountain.

Thomas married Esther Bartlett in 1796.  She died 4-7-1815 leaving nine children.  He married a second wife, Relief Miller 11-19-1815 and they had at least 9 more children, but some of them must have been born after the family moved to Rochester, N. Y.

Thomas was a cooper and farmer doing a large business making barrels.  However, he must have had some financial difficulties and gave a mortgage to Appleton Robbins.  Mr. Robbins sold this mortgage to Vinson Gould.  It is not apparent whether or not this mortgage was foreclosed, but Mr. Gould sold the farm to Gilbert Bascom in 1823.  Just what year Thomas Thorp and family moved to Rochester is not recorded.  Probably neither Mr. Robbins nor Mr. Gould ever lived here.

By his will Gilbert Bascom left the farm to his three living daughters, Elvira, Sophonia, and Samantha.  The husband of Elvira, Alfred or Alford Warriner died in 1881 and apparently Elvira came home to live soon after that.  Samantha, call Cynthia, also lived at home or in Northampton is not known.

This family did not reside here long, selling to Lucy M. Tuttle on May 7, 1908 (630-201).  She apparently lived here for perhaps a year, but on the same above date 5-7-1908 she sold part of the farm, 55 acres and 1/4 acre to Leon G. Fowles and Laura A. Frary.  Also on the same above date she gave a mortgage to the Easthampton Savings bank on the remainder of the farm, 30 acres and buildings.

Leon was married to Mary Madsen in 1914, and they moved into the house at that time.  Laura Frary lived in the north part of the house and kept two boarders, George and William Foley.  Leon and Mary had two sons, Elwyn and Leonard.  Mary died in 1961, and Leon became in poor health soon after and died in 1965.

Leon had turned the ownership of the farm over to his two sons, Elwyn and Leonard Fowles in 1964, and they sold the buildings and some of the land to Charles and Shirley (Carpowits) Fisher the same year.  Charles and Shirley have two children, Sheila and Sally.

–From “History of Old Houses” by Atherton Parsons
Return to the Edwards Public Library website.